Flower parterre in front of the New Palace

The Schleißheim Garden with its surrounding canals and the large bosket area between Lustheim and the New Palace was designed from 1684 by Henrico Zucalli when Lustheim Palace was built. 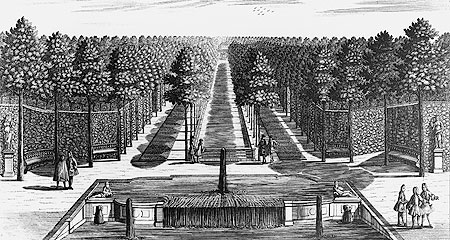 From 1689 an extensive canal system was created, the prerequisite for a baroque pleasure garden in the grand style. Dominique Girard, who was working in Nymphenburg at the same time, laid out the garden on the basis of this framework between 1717 and 1726, while the New Palace was being built.

In front of the New Palace a parterre was built at a lower level, with large ornamental beds, sculptures and a magnificent cascade. The central axis around which the entire garden was aligned first served as an alley for the popular court game of pall mall, and at the end of the 18th century was turned into a canal. The bosket area was decorated with waterworks, small architectural features and amusements. 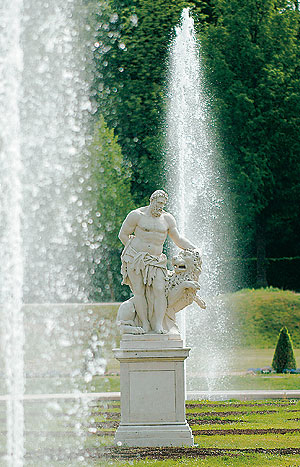 The original buildings that formed a semicircle behind Lustheim Palace and which served as an orangery, soon fell into ruin and have been replaced by hedges. The avenues radiating out from Lustheim are directed at outstanding features in the landscape.

Although at the beginning of the 19th century the garden was neglected, it was never radically altered by remodelling in the landscape style, which was what subsequently happened to many baroque gardens. Schleißheim is thus one of the very few baroque gardens that are still in their original form.

From 1865 to 1868 Carl Effner restored the garden in its original structure for King Ludwig I, and added typical ornamental forms of the time, most of which were however lost during the Second World War. The garden between the Old and New Palaces was also designed by Carl Effner.