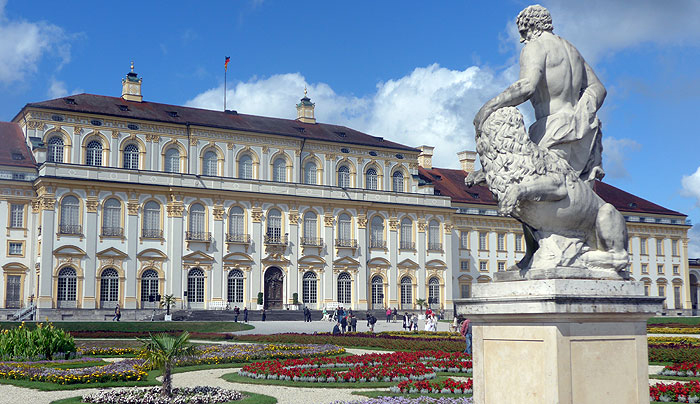 Elector Max Emanuel, who was hoping to become the next emperor, had the New Palace built as his future residence. Originally planned as a four-wing complex, it was begun in the winter of 1700/01 under the well-known court architect Henrico Zuccalli. 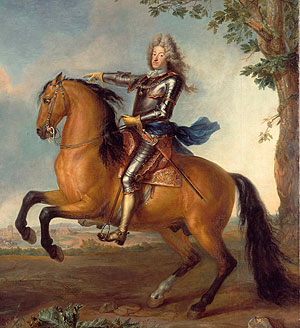 The unfortunate outcome of the Spanish War of Succession, which forced Max Emanuel into exile in 1704, brought the building work to a halt after scarcely more than the shell of the main wing had been built. It was not until the elector returned from his Paris exile in 1715 that the work could be resumed.

Because of the financial situation in the country, however, the original plan consisting of a cour d'honneur complex with massive side wings, further pavilions and the Old Palace on the west side was gradually simplified. Finally all that remained of the large-scale design was the monumental main tract – the New Palace – without the wings that would have connected it to the Old Palace.

Joseph Effner from the nearby town of Dachau, who had trained in Paris, supervised the building process. The outstanding interiors of the halls and state apartments are his work. Although the dream of the imperial throne had evaporated and money was in extremely short supply, there was to be no lack of splendour at Schleißheim.

Among the highlights of the interior is the ceremonial sequence of rooms which begins with the grand baroque staircase hall, continues with the big halls on the upper floor, the Large Hall and the Victory Hall and culminates in the Large Gallery.

Important artists from Italy, France and Bavaria – such as the sculptors Giuseppe Volpini and Wilhelm de Groff, the stucco-workers Johann Baptist Zimmermann and Charles Dubut and the ornamental metalworker Antoine Motté – worked together on the decoration of the rooms, with Max Emanuel's fame as a triumphant general as the overall theme.

The rooms contain outstanding examples of the furniture design of this time such as the magnificently carved and gilt console tables from the court workshop of Johann Adam Pichler. The splendid four-poster imperial beds belonging to the elector and electress are masterpieces of court textile production; few items of furniture of this kind have survived in their original location, as is the case here. 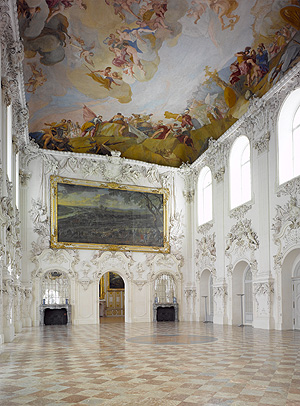 The ceiling paintings are the main features of the interior. The Bavarian artist Cosmas Damian Asam, by then already famous, painted the first frescoes in the dome above the staircase and the vault in the Maximilian Chapel. He was however soon followed by the Italian Jacopo Amigoni, who had already been working in Ottobeuren. Amigoni achieved the massive task of painting all the ceilings in the two main apartments and the ceilings of the two halls on the first floor, the Large Hall and the Victory Hall. For several decades the continuous fresco that covered the entire ceiling of the Large Hall was the largest ceiling picture in the world.

On the death of Max Emanuel at the end of February 1726, the palace complex had not yet been completed, but most of the main building was finished. Many of the rooms were still incomplete and the missing fixtures such as marble fireplaces, wall coverings, panelling and flooring were only gradually installed afterwards by Max Emanuel's son and successor, Karl Albrecht (reigned 1726-45).

Max III Joseph (reigned 1745-77), grandson of Max Emanuel and the last elector of the Old Bavarian line of the House of Wittelsbach, had the guards' hall turned into a dining hall and commissioned two richly carved palace portals from the Bavarian sculptor Ignaz Günther.

With the art collection begun by Elector Max Emanuel, Schleißheim New Palace was already a gallery palace by the end of the 18th century, and was increasingly made accessible to the public. This tradition is continued by the State Gallery of European Baroque Art, part of the Bavarian State Collection of Paintings, which is today housed in the electoral apartments and halls. It comprises works of all the main schools of this art epoch. In 2001, 300 years after the foundation stone of the New Palace was laid, this unique baroque gallery was reopened with a new layout after comprehensive restoration work.